Commissioned by a friend of mine to do a family painting for his new house. His idea for the painting is to have them as cowboys and girl and the background will be on a grassland with cows. My initial concept and idea was to paint something more action packed and fun. So I did a quick sketch shown below.

But on second thought, I decided not to use this idea. There are a few reasons for not using or further developing this idea. This idea might seem energetic and lot of fun in it, but my friend (who is the owner of the house) might eventually looks ‘small’ in the final painting due to it’s composition. Also the wife and son riding on the cow with him chasing behind might seem like they are ‘running away’ from him. Hahaha…. So I decided to trash this idea.

Then I begin to work along on something more peaceful and relaxing as I find it to be more appropriate for something hanging on the living hall’s wall. Finally the below sketch was the one that I emailed to my friend for approval. 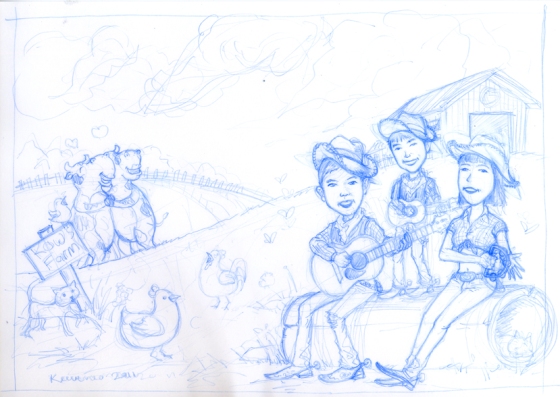 Upon approval, I began working on it and here is the final painting to be printed out in 100cm x 70cm.